Home » Blog » What Trees Have Chaga?

What Trees Have Chaga?

If you’ve been paying attention in the health world for the past few decades, you’ve no doubt heard of chaga. Chaga is a mushroom fungus which has been playing a popular role in alternative medicine and folk remedies for centuries, although it is only in the last few decades that the craze for chaga has reached international levels due to the increased easiness of selling chaga to countries where it is not normally found.

Chaga is found in select environments throughout Europe, Russia, North America, Eastern Europe, Canada and Korea. Chaga thrives best in colder environments, and does not grow with any normal abundance in places without a cold climate. Chaga itself grows as a parasitic fungus on a tree, also called a host tree; but what types of trees actually have chaga? Let’s take a closer look at where chaga can actually be found—and what to look out for when hoping to rule out “fake” chaga.

A Case of Mistaken Identity

More frequently, the “chaga” that people believe they see trees other than birch trees is actually a case of mistaken identity rather than real chaga. Mistaken identity situations occur because there are various formations and other fungi which closely resemble chaga that can grow on trees; because chaga is best known for its very distinct appearance, which resembles that of a large piece of burnt black charcoal, people often assume that anything which captures a similar appearance is chaga.

The following are the three most common cases of mistaken identity when it comes to “fake” chaga being found on non-birch trees:

Phellinus fungus: Fungus from the genus Phellinus (including P. ignarius and P. robinae, to name just two) are often very similar at first glance to chaga, since they have a black, cracked service. 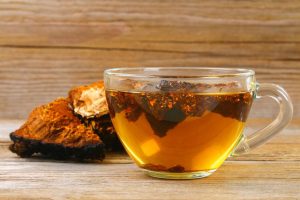 Wounds, tumors and growths: Various bark wounds and tree diseases can result in the appearance of large wounds, tumors, and other growths that are very similar in appearance to chaga.

Other Trees and Chaga

Chaga is not exclusive to birch trees, even though it is normally only found on birch trees. There are some other tree species which have been known to be host to chaga, including: elm trees, beech trees, hornbeam trees, and aspen trees. However, it should be noted that chaga growing on these types of trees is considered very rare and unusual.