Home » Blog » What Trees Have Chaga?

What Trees Have Chaga?

Chaga has bountiful health benefits and was used in traditional Russian folk medicine to address a myriad of health issues. Chaga is common in Russia, because that is its native range, but it can be found in colder climates throughout the globe. Chaga’s benefits are directly linked to how Chaga grows and what trees have Chaga.

Growing From the Inside Out

Chaga is a type of fungus that is known for growing on birch trees. Unlike many other fungi, Chaga starts its growth inside the tree, rather then beginning development on the surface of the tree. As it matures, it protrudes from the tree. The exterior of Chaga is very dark, almost black. It is extremely cracked and has the look of something that has been burnt. The interior is a rich orange/brown color with a corky texture. Chaga often grows on older trees or trees with an exterior trauma. It is not believed that Chaga kills trees, but many old or damaged trees die with Chaga.

Where Does Chaga Grow?

Chaga is most commonly found on birch trees. It grows in colder climates in deciduous forests. Because of the way grow Chaga mushrooms, its development on birch is significant to the health benefits associated with this fungus. As Chaga grows, it concentrates the nutrients and compounds found in the tree. Antioxidants and betulinic acid are two of the properties found in birch that give Chaga its potent benefits.

How to grow chaga mushroom? According to Mushroom-Collecting, Chaga is can be found on other trees such as beech and hornbeam, but it is very rare. Studies have not been done to investigate the contents of Chaga from these trees. However, it is assumed that because many of the beneficial compounds found in Chaga are unique to birch trees, Chaga harvested from other species will not have the same health benefits.

Does Chaga Grow on Cherry Trees? 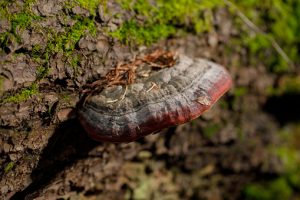 Does Chaga Grow on Poplar?

Aspen or poplars are another tree that is commonly mistaken for birch. Their white bark is easy to spot and dark black cankers can look very similar to Chaga. When inspected closely, you will find that these trees do not have Chaga. It is often a different fungal growth or trauma.

A Burl is a growth on tree bark that is part of the tree itself. Burls on hardwoods other than birch can also appear similar to Chaga, but there are a few distinct differences. The first is the burnt look of Chaga. The outer crust of the growth will be very dark and different from the color of the tree. A burl will be closer to the original color of the bark, perhaps a bit darker. When removed, a burl will be relatively the same color on the inside as on the surface. Chaga will be a distinct orange/brown color and have a slightly different texture than both the tree and the crust of the Chaga.

One Of A Kind

Chaga is unique and rare. It can be found in specific habitats, nearly exclusively on birch trees. The special relationship Chaga has with birch is what makes it so useful for improving health. One of the easiest ways to ensure that you are using genuine Chaga is to purchase it. Chaga Natural offers a variety useful products that have been harvested in the wild from birch trees. You can enjoy the benefits of Chaga without having to be an expert.

“No That’s Not Chaga” Fungi Magazine