How to Prepare Chaga Mushroom

Folk medicine and alternative medicine has been a staple of human civilization for thousands of years. In recent decades, the use of folk and alternative medicine has become popular due to the potential health benefits of using natural ingredients and herbs. One of the more popular ingredients in folk remedies is the chaga mushroom, which has been a part of folk medicine in various regions for hundreds of years and has recently become internationally popular.

If you are interested in preparing chaga mushrooms for consumption, there are a few key things you need to know. Let’s take a closer look at the chaga mushroom, how you can use it, and finally how you can prepare it for your own use.

All About Chaga Mushrooms

The chaga mushroom is a parasitic fungus which is found most often in cold regions such as certain areas of Russia, Canada, North America, Korea, and Eastern Europe. Contrary to popular belief, the chaga mushroom is actually not the flowering mushroom of the chaga, but the sterile conk. It is best known for its strange appearance, which makes it look more like a large piece of misshapen charcoal than a normal smooth, rounded mushroom cap. Because the chaga mushroom is parasitic, it is believed that its dark appearance may be derived from melanin absorbed from its host birch trees. 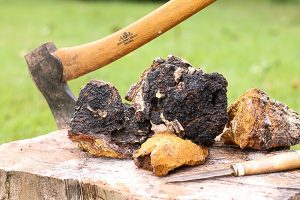 There are many ways that chaga mushrooms are used as a folk or alternative remedy. The most common method of using chaga is through direct consumption, since the chaga mushroom can be consumed in various ways and it is the easiest way to receive the benefits of chaga. The most well-known and popular method of consuming chaga is through creating chaga tea, although chaga is edible and can be consumed as a part of a solid food recipe as well.

How to Prepare Chaga Mushrooms

The way that you prepare chaga mushrooms will depend on how you want to consume them.