Home » Blog » Why Chaga Tea is Good For You

Why Chaga Tea is Good For You

Why Chaga Tea is Good For You

Chaga tea and the chaga mushroom

Chaga tea is tea made with chaga mushroom; to make the tea, the mushroom is usually made into an extract or compounded into a powder. The chaga mushroom is a fungus which is primarily found in the northern areas of Europe, Canada, North America, Russia and China. Chaga has been used as a folk medicine in some of these areas for centuries, and in recent decades it has found international popularity in the form of tea.

Chaga contains antioxidants, which have been shown to fight against free radicals; perhaps more importantly, chaga contains small amounts of betulinic acid—betulinic acid (and betulin) are actually from the birth tree which hosts the chaga, which actually absorbs the compounds from its hosts. Several Korean studies, including two published in the Nutrition Research and Practice as well as the International Journal of Medicinal Mushroom journals, have found that chaga demonstrates great immune supportive properties. These studies suggested that it is the betulinic acid and similar compounds found in chaga which may have great health supportive benefits. 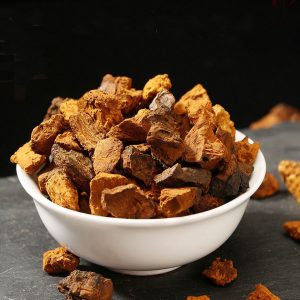 In addition to being a potential immune supporting agent, betulin may also help reduce and prevent obesity. Some studies have found that a regular dose of betulin may increase your metabolism, which consequently reduces your risk of obesity when combined with a healthy diet and regular exercise.

Chaga tea, made from extracted chaga, may help people obtain the benefits of chaga through an easily consumable resource. Chaga tea—when made properly—contains chaga extract which is usually introduced into the tea through powdered form.

Most chaga tea makers recommend about 1 to 3 grams per day, depending on your weight and whether you are currently fighting any conditions that you hope the chaga may help against. Some drinkers recommend splitting up the dosage throughout the day into multiple cups, due to the potential for diarrhea or stomach cramps from drinking too much chaga at once.

If you take anti-coagulants, you should not drink any amount of chaga tea. Chaga might increase your risk for hypotension as well as bleeding and bruising and may have serious or even fatal consequences for people with those conditions. Always consult your doctor before you start to drink chaga tea.