Home » Blog » Is Chaga Tea Good For You?

Is Chaga Tea Good For You?

Chaga Tea is a delicious earthy drink made from Chaga mushrooms. Chaga tea is dark, rich, and soothing to drink, but is Chaga tea good for you? Its use in folk medicine throughout Russia and Eastern Europe would suggest that it is.

There are few scientific studies regarding the various health benefits of Chaga because its popularity is just beginning to take off in the West. However, traditional uses and the known components of Chaga could lead one to believe that Chaga tea is good for you in a variety of ways.

Chaga grows from the inside of birch trees, then the mycelium bursts out of the tree. It is this charred looking chunk with the rich orange inside that is useful for steeping a potent tea. Because of this method of growth, Chaga concentrates the natural components in birch trees in the mycelia. Chaga mushrooms and the tea made from it are rich in betulinic acid, antioxidants and melanin.

While studies have not been performed on Chaga specifically, studies have been conducted with betulinic acid. A study published in Medical Research Reviews found that betulinic acid selectively attacks some types of altered cells while leaving normal cells unharmed. While we cannot make the same specific claims about Chaga, we do know that Chaga mushrooms have high levels of betulinic acid. 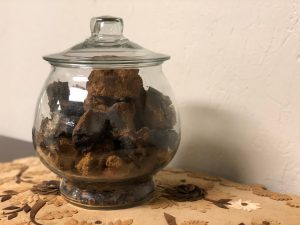 Antioxidants are known for reducing free radicals in our body. All kinds of toxins cause free radicals. These toxins include foods we eat and exposure to pollutants. Free radicals are associated with a host of problems in our body including inflammation and irregular growth of cells. Chaga mushrooms have extraordinary amounts of antioxidants. Superoxide Dismutase or SODs are a particularly important group of enzymes that protect our body against free radicals. ChagaHQ points out that SODs that naturally occur in our body decline as we age. Other supplements require ingesting SODs. Stomach acid often destroys these SODs before absorption. Chaga is believed to stimulate our body’s own production of SODs.

Chaga’s high concentration of melanin may be helpful for skin and resisting damage caused by sunlight’s UV radiation.

Chaga can also supports the immune system. We all know that when our immune system under performs it could potentially lead to decreased health.  Chaga tea would be a great dietary supplement to add to your diet during cold and flu season.

There is so much in our environments that cause our body to over or under perform, which can lead to a decreased health. Ultimately, Chaga’s superpower is to stabilize our bodies and help them function as they should. Many people use Chaga tea regularly, specifically for the healthy benefits they feel when they use it. While science has yet to prove exactly how Chaga works and what benefits it has for the body, many cultures have used it for years. You can try Chaga tea yourself to see how you feel and what healthy benefits you experience.