Chaga for Dogs and Cats

In recent years, chaga has gone from a somewhat obscure folk remedy to an internationally popular ingredient for helping to improve your health. Chaga is a mushroom or fungus which is typically found on birch trees in northern climates, particularly Northern and Eastern Europe, and is best known for its striking appearance which resembles a piece of burnt charcoal rather than a typical mushroom. In addition to certain parts of Europe, chaga can also be naturally in the northern climates of Canada, the United States, Russia and Korea.

Chaga has actually been used as a folk medicine for centuries. Today, people most often consume chaga by making a tea with raw or extracted chaga and hot water. Chaga extract is normally produced by grating the raw chaga mushroom until it resembles a powder and brewing it with hot water. Chaga tea is also sold in pre-made mixtures by companies who add other ingredients to the tea mixture, such as herbs or fruits, in order to enhance the taste and even add additional benefits to the tea. 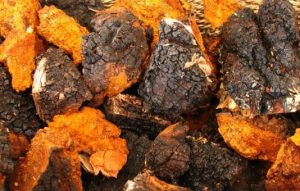 Chaga does not carry any inherent risks to people, but there are some people who should not consume chaga, like people who have allergy to mushrooms. People with diabetes and people who take any anticoagulant medicines should consult physician prior to incorporate chaga product in their daily diet.

Chaga for dogs and cats

Although chaga is very popular with people, many people don’t realize that dogs and cats can consume chaga as well. Chaga may help improve the health of dogs and cats just as it may help improve the health of people. Pet owners who decide to give their dogs or cats chaga can do so in several ways; they can brew their chaga tea and add some cold tea to their pet’s food using an eyedropper; or they can purchase extracted chaga tinctures and add them to the food using an eyedropper.

If you decide to give your dog or cat chaga tea, it’s very important that you only use tea made with pure chaga extract and nothing else—this is because certain herbs, plants, fruits, vegetables and other ingredients that companies may put into the tea might be harmful to dogs and cats. If the company doesn’t have an upfront, full ingredient list, it is not recommended for use with your pets. The same applies to chaga extract tinctures: only use pure extract with no additional ingredients for your pets.