Can Chaga Make You Sick?

Can Chaga Make You Sick?

Chaga, scientifically known as Inonotus obliquus, is a fungus which has become more well known in recent years for its popularity in alternative and folk medicine. The chaga mushroom is naturally found on birch trees in the areas such as Northern and Eastern Europe, certain parts of Russia, Korea, as well as more northern parts of Canada and the United States. The chaga mushroom is visually distinct due to its charcoal-like appearance, which does not resemble a traditional mushroom or fungus at all; this unique appearance is due to the high amounts of melanin in the fungus. Unlike most consumable mushrooms, the part of the chaga mushroom that is traditionally consumed is not actually the fruiting body but the conk, which is sterile. 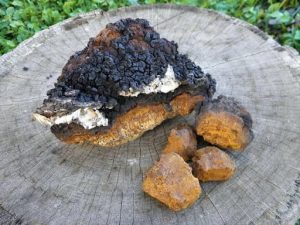 Chaga has been used in folk medicine for centuries, particularly in Russia and Northern Europe. Today, chaga is popular around the world. People today traditionally consume chaga by drinking chaga tea; chaga tea uses raw  chaga, which has been grated repeatedly until it resembles a fine powder, which is then mixed with hot liquid to create a tea beverage. Chaga contains antioxidants and phenols, which may help improve health. The particular phenols in chaga are called beutlin and betulinic acid. Some companies offer chaga tea which consists not only of extracted chaga but other herbs, plants and ingredients as well.

Although chaga is popular, one question that many people have when they decide they want to start drinking chaga tea is this: can chaga make you sick?

Chaga—and thus chaga tea—is not recommended for consumption in certain people with certain health conditions. If you have diabetes, and you want to drink chaga tea, we advise you to contact your physician for consultation. Also if you are taking any anticoagulant medications, such as aspirin, chaga tea is not recommended because of the triterpenes in chaga tea. Before you drink any chaga tea, you should talk with your physician about whether or not chaga could be a good dietary supplement for you due to your current health conditions.

It’s also essential to not drink an excessive amount of chaga tea, as this may cause some stomach discomfort and possibly diarrhea in some people. As a general rule of thumb, however, chaga tea does not pose risks.