Can chaga lower blood pressure? This is a question that many people with an interest in chaga or lowering their blood pressure have.  We should say that chaga mushroom is not a drug and it can’t lower your blood pressure. But let’s take a closer look at chaga, chaga tea, and its health benefits in order to get a better idea of how chaga may improve your health.

What is chaga tea?

Chaga has been used as a folk remedy and in alternative medicine for centuries. The most common way that chaga has been consumed—and is still the most popular way today—is through chaga tea. Chaga tea is created by taking extracted chaga, which is extracted by finely grating it into a powder, and combining it with hot water in order to create a tea. Today, some companies sell chaga tea which contains ingredients in addition to extracted chaga, such as other plants, herbs, fruits, and other ingredients in order to enhance the flavor and add more health benefits. 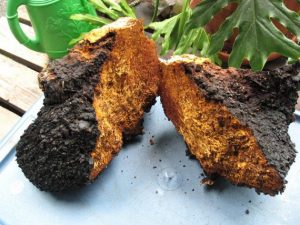 The benefits of chaga and chaga tea

Chaga contains ingredients, such as antioxidants and phenols, which may improve your health. Drinking chaga tea may help improve your health, but before you begin to drink chaga tea, be sure to consult with your doctor about its safety. Chaga tea might not be recommended for people with certain health conditions, so never drink chaga tea without first consulting your physician.

Chaga tea can be consumed regularly, as long as you are not drinking too much—drinking too much chaga tea may cause some stomach discomfort. You should be conscious about what company you buy chaga tea from as well; thoroughly read over the ingredients list to make sure you know what it in your chaga tea, and avoid buying from companies who are not willing to be transparent about the ingredients they use in their chaga tea.