Chaga mushrooms have been a part of folk medicine for centuries. Chaga grows on birch trees in northern forests. It protrudes as a charcoal colored conk. While its looks are rather unappealing,  indigenous people groups found a variety of uses for this special mushroom. Where its specific habitat exists, people have been using Chaga to relieve various ailments. Multiple generations have used Chaga for health and well-being.

The word Chaga relates to a Russian word for mushroom. There are no written records, but it is likely that the Kanty people, in Siberia, are among the first people to use Chaga mushrooms. Their regular use likely began in the 11th century. In addition to the Kanty, tribes in the Ural mountains used Chaga as well. There are also mentions of Chaga in ancient Roman documents. Supposedly, traders brought it from Europe. The most famous early, celebrated use of Chaga comes from a 12th century Czar. This Czar claimed that Chaga cured his lip growths. 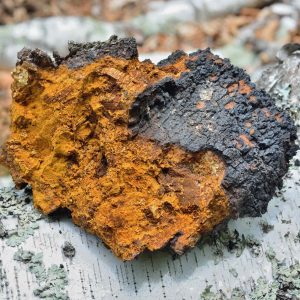 Chaga was also used in the North America by several native people groups. It was commonly used as it is today in teas.  In addition, it was used for kindling, and smoked or burned ceremonially.

Throughout Chaga mushroom history, this special piece of nature has been used in folk medicine. People use Chaga to address a wide range of ailments from stomach ulcers to tuberculoses. As its popularity has grown around the globe, there have been  studies regarding its effectiveness as a an antioxidant, immune booster, and even an agent to fight irregular cells. These studies have primarily positive results. However, they are primarily performed in vitro or on mice or rats. There are very few clinical trials on humans to confirm what kind of benefits Chaga may have for the human body.

Why is Chaga Healthy? 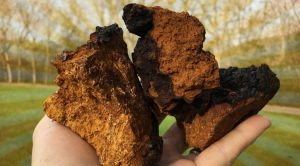 Future of Chaga in Medicine

Japan and Russia continue to lead the way for helpful studies and practical applications for Chaga in medicine. Scandinavia is also beginning to invest in understanding the vast uses of Chaga for health and well being.

The popularity of Chaga is increasing throughout the world, not just the northern regions where it grows. As its popularity grows, it is important to understand the significance of harvesting sustainably. Chaga grows along with a birch tree for up to twenty years. When the birch tree dies, the Chaga will die also and it is no longer useful for consumption. It is important that the harvester remove the Chaga without damaging the tree. A tree with damage is likely to face disease or infection and die prematurely. Leaving a small amount of Chaga on the tree will allow the conk to continue to grow. About every three years Chaga regrows to a size that is ready for harvest. Let’s continue to honor the rich history of Chaga by harvesting sustainably and caring for the northern boreal forests where these treasures grow.

“The History and Health Benefits of Chaga Mushroom Tea” The Ethnoherbalist

“A Brief History of Chaga” Chaga-mushrooms.com

“The Chaga Story” The Mycophile